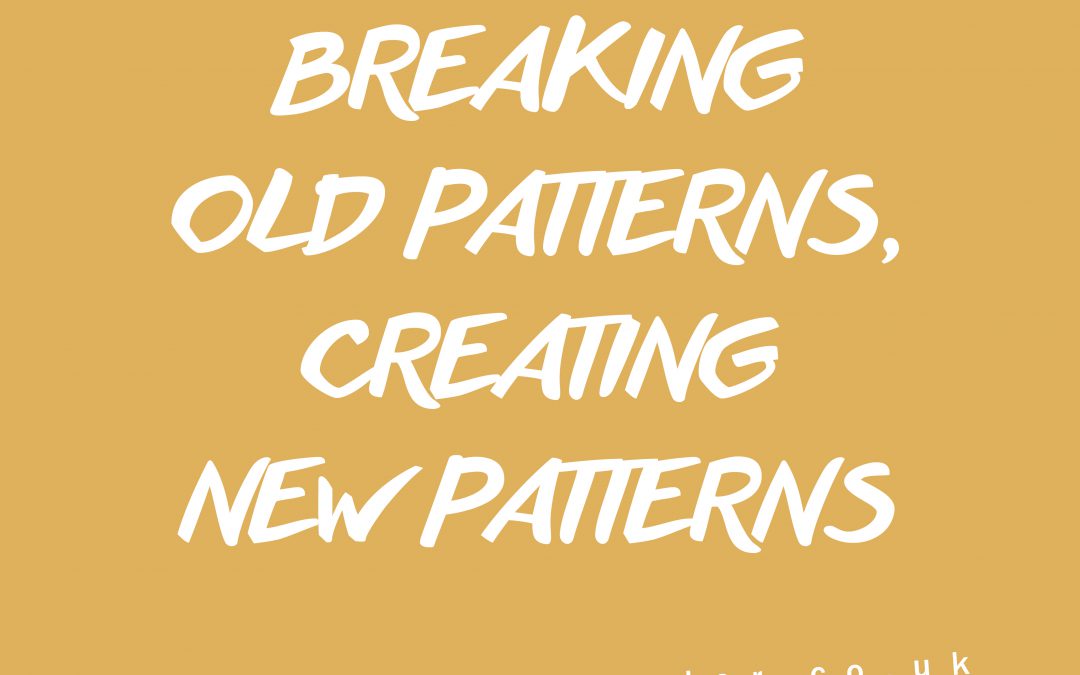 Patterns and habits provide us with familiarity and predictability, which become our comfort zone no matter how emotionally or mentally harmful or damaging these can be.  We develop patterns of interacting with people, family, friends and colleagues, it is the unique relationship created with an individual.

Each person we have a relationship with – personal, intimate or professional – trigger our emotional, thought and behaviour patterns. These serve the type of relationships it is; there are positive and negative influencers within each relationship for both parties.  For example personality traits, expectations, self perception, relationship beliefs, emotional and mental state, relationship experience and life experience etc.

We are unaware of the patterns as they become invisible, happening routinely until we decide to challenge and change them.

It is the same within familial relationships. We develop the relationship person to person with each family member dependent on the above and more.   When mental ill health is present, it can demand the use of manipulation skills to try and control what is happening in a world where you feel out of control.  Mental ill health affects not only the person, but also the people around them.

Before discovering my son was living with anxiety, I made some huge parenting mistakes – mostly to do with his behaviour and my own emotional state.  I found it hard to understand his reactions to situations. For example when telling my children we were going to a theme park, he would be fine initially. Then he would ask question after question after question, it could be the same question or a variety of questions.  He would be temperamental and have ‘volcano’ moments, or he would get over emotional. Going to bed was a fight every night, it was exhausting. At the time I felt it was hard work, but I hadn’t once really considered what my son was going through.

The patterns created to deal with my son were a reflection of my life at that time – negative and unhelpful.

This pattern between him and I continued. There were many more examples –  he would snap and I would punish, I would tell him about new adventures and regret it the minute he started pushing me for answers and I would snap.  My three other children also didn’t understand it, as they would be excited for the trip. They saw it as him spoiling it so they would argue and fight and everyone tried to get everyone else in trouble.  His father understood it even less and it escalated out of hand. There were times where I tried a new approach or adjust my reaction. But it very quickly went back to the same old patterns for all of us. I can’t tell if it was my son taking us there or me reinstating the old patterns, either way they were unhealthy and unhelpful for all involved.

These patterns went on and on until the day I had a sudden aha moment where it dawned on me that he had anxiety. It was after a conversation with someone and the guilt hit me like a freight train, it didn’t help I was in my own darkest depression.  The pattern changed but my son had learned that he could get his own way with his behaviour and he capitalised on it. He used his behaviours to get attention, to monopolise my time. Although some of it was real anxiety, telling the difference became almost impossible through my guilty eyes.

I now know that my son was emotionally immature. Living with anxiety all his life, he needed anxiety help and support. I had become his emotional lifeline.  He relied on me to be his emotional crutch and I gave, even when I had no emotional capacity I tried to give, until I couldn’t give any more. These emotional, thought and behaviour patterns within the relationship were founded in guilt. How I reacted to his behaviours, never wanting his life to be like that, regretting losing my patience, never being happy with how any episode turned out.  But shortly after I’d realised it was anxiety, I had to cut out the guilt and deal with the situation at hand or face the consequences.

It became abundantly clear that there were times when his behaviour was manufactured to get his own way, and times when it was genuine anxiety.  The similarity was astounding but when you were looking for it, obvious. I knew he was using some of it for his personal gain and it had to stop. At the time, I was close to breaking every day and I had other unhealthy patterns going on in my life that I was tackling.  He very quickly started making better decisions about how he dealt with issues with some reminding of whether it was genuine or manufactured. I stopped listening to my guilty voice and seeing through guilt-ridden self judgement.

We challenged the way we interacted.

We talked more about what was going on and fought to understand our own behaviours, emotions and thoughts.   We became accountable for our individual actions, while we made changes, the other patterns with other members of the family changed too. Self knowledge is a super power.

If you are coping with a partner, child or family member with mental ill health, recognising the unhealthy and ultimately unhelpful patterns we have with them, we can begin to break the negative patterns and introduce positive ones that are more empowering and helpful for all involved.